Weighing the Pros and Cons of Bay Windows and Their Alternatives 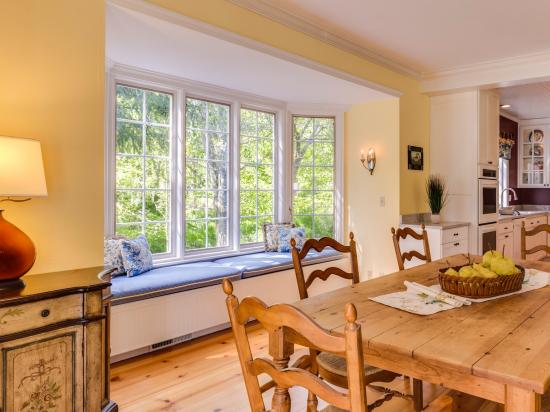 Bay windows stick out from the main walls of your home, creating a bay inside the room right in front of the windows. Bay windows typically consist of one or more picture windows in the middle, with another window on either side, usually at a 95-, 45-, or 30-degree angle from the central window.

Bay windows are appealing because they provide form and functionality to any home. The interior bay formed by the windows creates a cozy reading nook or space for extra seating, while the exterior extension adds an interesting architectural feature to the property.

However, because bay windows protrude from a home's architecture, they aren't always a practical (or affordable) option. Let's take a look at some of the pros and cons of bay windows to help you decide whether or not this unique style of window is right for you and your home.

One of the biggest benefits of bay windows is the extra interior space they add to your home. The bay can be used in many different ways, depending on what you want to achieve.

For example, you can turn the space into a long window seat with cushions or fill the space with an accent chair to sit and enjoy your coffee or read a good book in. Or, you could convert the bay into a workspace with a view of the outdoors by adding a desk. With a little creativity, the options are endless!

Bay windows aren't just functional — they also add value to your home by increasing its curb appeal, adding square footage, allowing more natural light in, and providing better views. This can make bay windows a very worthy investment if you're thinking of reselling your property down the road.

Since bay windows extend out from the main wall and have windows on three sides, they allow more natural light in than standard picture windows. This is great if you want to illuminate a room where you spend a lot of time in the day.

There's a reason older homes often look so much better than modern houses — many of them have bay windows! That's right, there's just something special about an elegant set of windows jutting out from a home's exterior that gives it that classic, beautiful look.

One of the biggest reasons more people don't have bay windows these days is that they can be quite expensive. Since they have to stick out from a house's walls, installing bay windows is more involved than simply replacing an existing window or adding a new window that's flush with the walls.

While bay windows are more expensive than other types of windows, you have to remember all the benefits they add, including increased property value. With that in mind, you should view them as more of a long-term investment.

That being said, there are many more affordable alternatives to bay windows offered by Hodges that you can consider if you aren't ready to invest in bay windows just yet.

Create an overabundance of lighting

While in many cases more natural light is a good thing, there is such a thing as too much sunlight. For walls that receive a lot of direct light during the day, bay windows can potentially result in too much brightness and glare from the sun. This, in turn, may increase cooling costs in the summer. It should be noted, however, that more sunlight in the winter means warmer spaces (and lower heating rates!).

The unique structure of bay windows means that they may require custom-sized drapes, curtains, blinds, cushions, and other accessories in order for everything to fit properly and look good. Naturally, anything custom-made is more expensive and harder to acquire than standard-sized fittings.

Similar to bay windows, 3 Lite slider windows allow a large amount of light to enter your home because of the added pane of glass. Not only that, but they have the added benefit of being able to slide open when you want good ventilation and fresh air.

Casement windows operate much like doors, in that they are hinged at one side and swing open. They provide the views of large picture windows, but also maximize ventilation and airflow. Like bay windows, casement windows can add to your home's curb appeal and property value, in addition to being functional.

Casement windows often come with mullions incorporated into their design, which gives them a more vintage feel, such as that of bay windows. This optional design feature makes them one of the top bay window alternatives available on the market.

Picture windows perform many of the same functions as bay windows, including letting lots of natural light in, providing views, and adding visual interest and aesthetic appeal to your home's exterior.

Picture windows get their name because they frame your outdoor views as if they were pictures — think vibrant paintings or HD photographs. Unlike casement and slider windows, picture windows are fixed in place and can't be opened. However, they can easily be combined with a top or bottom casement window to add the option for ventilation.

Like bay windows, picture windows make a big, bold statement on your home's exterior and maximize the comfort and aesthetics of any room. For example, floor-to-ceiling picture windows can give a living room or dining room a refined, contemporary design, while flooding the room with natural light and letting you enjoy all the surrounding views during the day.

Hodges Is the Best in Replacement Bay Windows

No matter what you decide, Hodges is the best in the business when it comes to bay windows. If you're still on the fence about whether or not to go with bay windows, or you're unsure of what bay window alternative is best for you, call us to discuss your replacement window options.